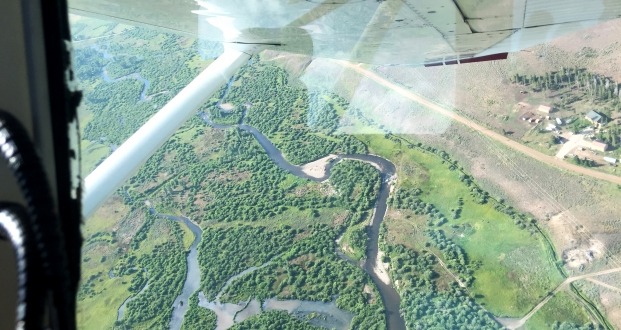 I was headed to the airport for my first LightHawk flight on my fifth day as the organization’s Western Program Director. Sure, I had been on plenty of flights in my grandfather’s planes when I was a kid, but this would be my first time in a small aircraft since. Our pilot, Stephanie Wells, was once a NASA pilot, so my nervousness wasn’t so much about the flight, but rather about throwing-up on our pilot a week into my new job.

Stephanie met me at the airport in Broomfield, Colo. After our pre-flight inspection, we were up over Corona Pass before I had time to reconsider taking the Bonine pills in my bag. The flight was smooth and the views were fantastic — I didn’t even feel queasy. I could see where trains used to go over the mountain pass before the construction of the Moffat Tunnel in 1928. The views of the old Boulder Wagon Road and Yankee Doodle Lake were incredible.

In Granby, we touched down to pick up partners representing Trout Unlimited and Colorado Headwaters Land Trust. Both are involved in a Grand County Learning by Doing Cooperative Effort project on the Fraser River. Together we flew over that river, a tributary of the Colorado River, to document baseline conditions for a revegetation project and to scope out several additional potential revegetation sites.

Focused on maximizing efficiencies to benefit river health, the project is being funded through a unique public-private partnership of Front Range and West Slope water stakeholders in Colorado (including Denver Water). The project partners are also striving to facilitate habitat management and enhancement with reduced river flows across the Upper Colorado system. That system serves as a critical municipal, agricultural, recreational, and industrial water supply source for the state, while also providing important aquatic habitat.

I enjoyed learning about the collaborative effort behind the Fraser River project. The semi-arid Front Range water diversion projects can be very contentious and it was heartening to see how a collaborative approach is gaining traction. During the flight, our partners said several time that seeing the river from this new perspective really confirmed and emphasized why they were doing current restoration projects and why they needed to expand the projects.

We did have one brief scare when the window swung open and all of us were blasted with wind. Wow, sticking an arm out the window suddenly reminded me just how high above the ground we really were! After another passenger and I struggled to get the window back closed, us passengers breathed a sigh of relief, while Stephanie said, “Don’t worry, they are made to open like that.”

After dropping off our partners, I got to hear a bit about Stephanie’s past missions with LightHawk. She told me about several flights she did in Guatemala with the Wildlife Conservation Society to photograph human settlements inside the Maya Biosphere Reserve to monitor expansion and growth of settlements inside the reserve.

As we flew back I was struck by a thought — LightHawk sure seems to attract amazing partners and pilots! I can’t wait to learn more about the amazing people and projects associated with this organization.

In the next few weeks I’ll be getting settled in and learning more about our work by doing on-site visits with our partners and pilots on the West Coast and in the central Rockies. For those of you who I don’t meet on one of those trips, I sure hope to meet you at Lake Champlain for the Fly-in during mid-October.

I am looking forward to working with all of you to elevate conservation efforts to new heights with LightHawk!

We use cookies to ensure that we give you the best experience on our website. If you continue to use this site we will assume that you are happy with it.OkPrivacy policy